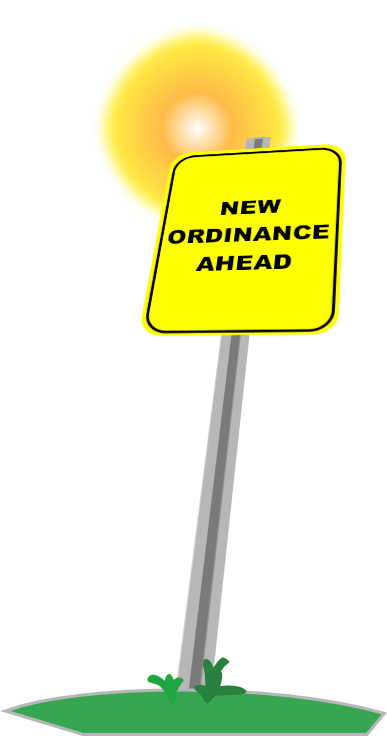 There is a new sidewalk on your street, or a sign restriction, zoning that closed off an area that you own to development, water service to your rural home is mandatory, or ‘all of a sudden’ you have forced health care being jammed down your throat like a broken glass encrusted tongue depressor.

Somehow, you didn’t see this coming.  Or at the very least you had heard rumors, but figured that time was on your side.  Elected officials would surely consider that changes which have potential costs or resultant effects are deserving of time and consideration before action, right?  Consideration perhaps by the public at large would also be aided by proper information flow through radio, TV and print media one would assume, so the question must be asked: Where were you during all of this planning?

Are you saying they ignored you and others like you and did it anyway?

Surprised?  Perhaps you shouldn’t be.  When many of your community’s  decisions are made, it is before the public has a firm grasp on the consequence or cost.  Your knowledge of the details are sometimes an after the fact issue. With health care legislation, “passing the bill to see what is in it” was a clear indicator of the respect the folks who spend your money have for you.  And that was even in the face of majority opposition.

Locally, there are nearly as many little projects going on as there are people.  And by the time you are made aware of their existence through a touchy feely ‘lets do something good for the community’ special report on the action news program, the decision to move forward with taxpayer dollars or through some form of public grant is already made.

The problem is that unless you are part of the inception team on such things, the end result is unknown until it is too late.

As an example, many of you are unaware that a project going on in Traverse City RIGHT NOW has an implied effect on farming, water tables and hunting throughout Michigan. Irrigation, changes in wetlands, and well levels could be jeopardized by the action of one interest group and a willing accomplice in state government that has pushed hard for the removal of a series of dams in my county of Grand Traverse.  Even property values are dropping along the river’s edge in places, because those properties no longer reside on-the-river’s-edge.

For the sake of trout swimming upstream.

While touting a return of some wetland’s acreage, the spokesman for the group Great Lakes Fishery Trust (this from a local rotary newsletter) says:

“The removal of the three Boardman River dams will be the largest such project in Michigan’s history and result in the largest wetlands restoration in the Great Lakes Basin,” said Erin McDonough, a trustee of the Great Lakes Fishery Trust Board and executive director of the Michigan United Conservation Clubs. “It will reconnect 160 miles of free flowing river with the Great Lakes for the first time in nearly 150 years.”

McDonough added that the project, titled: “The Boardman: A River Reborn” has implications for Michigan and the nation since there are 2,500 similar dams in Michigan and 79,000 comparable dams in the United States that are aging, presenting safety threats and impounding natural waterways

It started in 2005, so where was I?  One would think a person as politically active as I would have been  front and center in the at least verifying this is a good idea, right?  Certainly a project of such magnitude in a small community such as ours would rate a little attention.  The news accounts are there for a few years, so how might this undertaking be ignored to this point?

If only this was the only battle, it might not have been.  And frankly, it seemed remote, distant, unlikely to happen.. until it did.

First, the effort was made to discount the electrical generation value of the Dams.  One of the safest, cleanest, and marginally inexpensive forms of electrical generation was given the sweet kiss of death through mismanagement by our local city owned utility, Traverse City Light & Power.  By losing $5,000,000 (supposedly) over a period of about 20 years, the viability as an electrical generation unit was easily rendered away.  The regulatory (FERC)  license which was issued in perpetuity for NOTHING (as long as the dams were intact) was given up by the city voluntarily, and the replacement licensing would cost over $500,000.  From an editorial in the Northern Express:

“Jim Bernier of Consumers Energy thought the licensing fee of $600,000 to $750,000 was overstated, in part, because it might be possible to get all three dams licensed under a single application as FERC has done in the past with other dams.  (As a note, TCL&P were not required to renew the FERC license for two of the three dams … ever.  The lifetime exemption was lost when it gave up operation without public input.) “

Part of the trick is to escalate the cost of opposition it seems.

Funny, how I should have been aware that 150 year old, several mile long physical part of our local environment was about to be rendered obsolete.

So it seems the other part is to make sure no one knows what is going on until it is too late.  Todd kalish of the DNRe fisheries unit, which was the other driving force behind the removal, opines (this also from the northern express editorial):

Kalish said that he has this advice for anyone questioning the dam removal: “Look at the data, look at the studies. We involved 1,000 people, and hundreds dedicated their own time, and they were extremely devoted. They were very attentive at being impartial.”

Name them.  All of them, and how they became involved. And while you are at it.  Name the times where broad public input was encouraged, or even acknowledged..  I just don’t remember much being said until the license was gone and the water from the impoundments started going away.

I am now an elected county commissioner.  When the announcement of the $1,000,000.00 fisheries grant was made, I asked for as much information on the dam removal process as possible.

In fact, I wrote:

“Given my involvement in the oversight and management of future liabilities as a commissioner for the county, I would be interested in:

The ‘talking points’ I asked about were essentially a guide for those who would speak to the press on the dam removal group’s behalf. They allow little challenge, and were designed as a unified message for public consumption. As I found out, most (outside of some riparian and adverse possession issues) of my questions were not really considered during the process of negotiating the removals.  Interestingly, the environmental issues questions were shrugged off with a “DNRe will handle that if it happens” answer.

Really?  How does one handle an environmental emergency in an area that relies on its environment for its existence?

Folks, I wasn’t there to ask these questions early on.  The public input portion was insufficient in my opinion for me to have generated such questions.  The materials sent to me by the fisheries guy Kalish, when I asked as a commissioner elect, would lead to a neutral decision of ‘who wins,’ but nothing more, in this scenario.  Then I found another original document of a study that showed a higher upfront dollar cost to REMOVE dams than to repair, and continue onward as we have for over a century.  Funny how that study wasn’t provided with the materials offered by Kalish.

How can we be there if our government is holding back information until it is too late to make educated choice by the public at large?  What happens when those who pursue these gigantic changes withhold information that is crucial to an informed decision as in the release of a valuable lifetime FERC exemption?

How can you be there, when ‘there’ is designed to always be just outside wherever you are? The moving targets provided by government unchecked and unaccountable need to be glued down.  Transparency is more than saying if you ask about what we are doing, I guess we can tell you.  Its about making an attempt at fully informing the public before one cent is spent with tax dollars.  Its about advertising both the cost and benefit of substantive changes (the good with the bad) BEFORE moving the cheese.

Even if some folks don’t like too many hands in the planning, its about inclusion.  Even if folks suggest nothing will ever get done if there is resistance, it is important all know the consequence of action.

People will tell you “Progress takes innovative efforts, and it takes action!”

Indeed it does.  It takes carefully considered action.  As does the successful pilfering of a man’s wallet, particularly when knowing he is quite alert to such efforts.

← Judge’s Ruling Right – though not easy.
Raise Your Prices. →

3 comments for “Where were you?”