Jack Hoogendyk offers his valuable  experience as a lesson in politics. Pay CLOSE ATTENTION.  A little Skinny on this at the end..

Ok, you ask, “If I am looking at the THE most powerful Republican lawmaker in Lansing, why do I see two images?” Good question. The answer is, because although we are quite sure it will be one of these two, we just don’t know which one yet. But, before we get too far ahead of ourselves, let’s discuss WHY one of these two gentlemen will be in that august position. 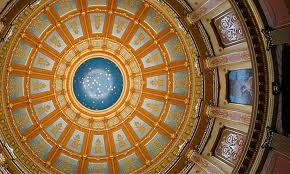 Under the Capitol dome, the most important and powerful positions are Speaker of the House and Senate majority Leader. Those two individuals really decide which bills get heard and which don’t. They are the ultimate “deciders” of whether a bill is put on the floor for an up or down vote. They also control the purse strings and decisions about tax and regulatory policy.

Over the the last four years of her governorship, Jennifer Granholm was unable to get much of the Democrats’ agenda done because the Republican Majority Leader, Mike Bishop was standing in her way. She had the Speaker of the House, Andy Dillon doing her bidding most of the time but generally, if the GOP did not like it, the Leader would simply say “No dice.”

There will be new leadership in Lansing in 2011, not just in the Governor’s mansion, but also in the House and the Senate. Both Andy Dillon and Mike Bishop are term limited and will leave office on December 31, 2010.

While all indications are that November 2, 2010 will be a very good day for Republicans, it does not look like they will be able to win back the House from the huge 67-43 Democrat majority. They will get close, but it is not likely. That means another Democrat Speaker of the House. All signs however, are that the GOP will keep, if not strengthen its hold on the Senate.

With a Democrat driving the agenda in the House and a likely Republican governor who is widely regarded to be a moderate, who is in charge on the south side of the Capitol is very important. That person, the Majority Leader, will be the “firewall” to stop any bad legislation.

So, who will it be, Randy Richardville or John Proos? Before we answer that question, we need to explain how the Leader is chosen and what, if any role you might play in that decision. I will explain the process to you in a future letter, but for now, you should begin to explore the voting records of these two lawmakers. Belive me, there is a difference, and who is in charge could have momentous effect on the future of Michigan’s economy. (Can you say “taxes, unions, and regulations?”) To examine the voting records of these two gentlemen, just click here.

Thanks To Jack and his newsletter for this.  The point is to communicate YOUR wishes to your would be legislator, because the decision to select a leader will be the FIRST ORDER OF BUSINESS.  A properly conservative leader will put the better items forward, and perhaps limit the moderation we have seen.

OK Have you examined ALL the votes yet?  Perhaps not, but there ARE some indicators, and some seeming contradictions.   At first glance:

So what to do?

Continue to read.  At this point, MY gut says go with John Proos. Seems to be more conservative, and the Nofs connection when voting leans towards Richardville’s MEA connections.  Apparently assistant leader is meaningless anyhow.  Is Richardville a BAD guy?  I would say I don’t know. His willingness to limit the manner in which Michiganders earn their bread is a big red flag.  Further, given that at the very least, we have a  centrist executive in our future, we will need someone who is more openly conservative.