If this resolution of this particular issue currently makes you happy, you might find another reading source.  Michigan government is out of control. 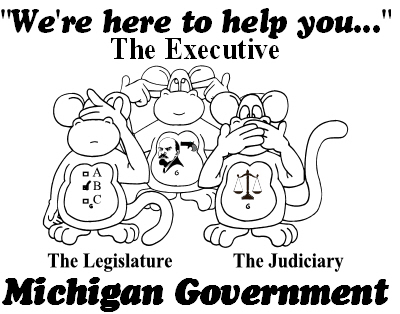 I’m likely going to bore you unless liberty matters.

Cheesy platitudes about freedom, our rights, you know silly little things such as that shouldn’t keep you from your daily duties anyhow.  You’ve heard people like me go on and on about how a teeny little law is the “end of the world” and likely dragging us deeper into the abyss of a totalitarian utopia, right?

That’s ok..  you have friends in the Legislature who cannot see the damage they do, an executive branch which doesn’t listen, and a judiciary which will likely never say anything contrary to “popular” opinion anyhow. Bye.

But expect to see much in protest to the HB4377 on this site and elsewhere.  The passing of HB4377 has proven that stupid is indeed contagious, and prolonged proximity contact in legislative chambers dulls the sense of liberty in our elected representatives.  Im not the only one who feels this way:

I encourage everyone to Weigh in on the Smoking Ban Poll. But, before you make your feelings known, keep in mind that this issue is about Private Property Rights, not about smoking. If you didn’t read my article on “Is Michigan’s New Smoking Ban Constitutional???” please take the time to do it now.

I am hoping our attorney general is willing to examine the issue and put up a fight for the constitutional protections of Michigan citizens.  At the very least the equal protection laws of the constitution of the United States renders it unenforceable because of the “exclusions.”

nor be deprived of life, liberty, or property, without due process of law; nor shall private property be taken for public use, without just compensation.

Due process..  huh.. oh yeah, that was for those guys..  you know the ones a long time ago..  Just like the U.S. constitution..  something that existed once.

Someone recently argued with me that.. “so what? That’s what we have, a Democracy..”  No..  We do not. It is a Republic.  It was declared a Republic, it is a nation of law and protections afforded our God given rights by the framers with the constitution.  The constitution which now appears more challenged than at any time in history.

So the question remains..  Will we have a champion?  Will we find (hopefully) an attorney general who sees this for what it is, recognizes the loss to our liberties by fiat, or will we have to sacrifice the livelihood of yet another Michigan business in the name of freedom to TEST this bad law?

Democracy does not allow a majority of citizens to determine that the remainder must jump off a tall building, and it does not provide cover for the taking of rights we are born with and shall not be separated from.

I have disagreements with the way our legislators spend money, and allocate resources, and frankly marginalize our freedoms by tying us to the debt they create, but this is a far more insidious scheme.  There are some who claim it is a slippery slope, where food shall be next, and perhaps how many hours you sleep.

Given the ban on transfats in NYC, why would it at all be so distant a possibility.