I wrote this 22 FEB 08, prior to the crash of Random Rants from an Airline Employee. I decided to re-post it given a column I’d writen for CM-Life.

I’m currently taking ECO 222 – Behavioral Economics. The class shows how different factors affect the market. For each of the experiments, we students act out a market scenario. Each experiment usually has 2 or 3 “Sessions” whereby different factors come into play. After we do this, we record the data and subsequently answer questions – our homework. It’s actually quite an interesting way to learn the different aspects. One of our recent ones was concerning minimum wage.

Let me give a quick rundown of the setup. In the class, there were 13 “job seekers” with a reservation wage (the wage at which they are indifferent to work) of $5, and 13 who had a reservation wage of $12. There were 9 of us who were the “employers” in the scenario. For the first session, if we hired one employee, we could produce goods that earned us $20; hire two employees and we would get $30. The employees that didn’t work “earned” their reservation wage. Keep in mind, all values are represented by dollars as it’s an objective, quantitative way to show these theories in action. For the second session, it was the same thing as the first, except there was a $15 minimum wage in place. In the third session, the minimum wage is still in place, however now we are able to hire four workers; 1 worker earns us $30, 2 earns $55, 3 earns $75, and 4 workers earn the firm $95.

I’ll go into the results of each of these sessions. I’ll also analyze them using competitive theory.

In session one, all of our $5 workers were employed, and 3 of the $12 workers were employed. At the end, all 9 firms found workers, and 7 of those 9 had 2 workers. The average wage turned out to be $10. This means all the unemployed workers, the $12 ones, were voluntarily unemployed – their reservation wage was above the average wage paid by employers. Total profits for the firms were $97

As mentioned above, session two is just like session one, except there is the $15 minimum wage. After this simulation went down, we ended up with only 9 employees, an almost even mix of the unemployed having $5 and $12 reservation wages. Average wage was, surprise surprise, $15. Total profits for firms in this session? $45 – more than 50% less than in session one.

Analysis of Sessions 1 and 2

Session one is pretty straight forward with how it turned out. The people that were able to achieve a higher profit by getting that second employee hired them, if they were going to get less profit by hiring that employee, they wouldn’t. This is trying to demonstrate a completely free economy.

Session two is different though. As mentioned this is where the $15 minimum wage kicks in. Is this the explanation for only nine employees being hired? Absolutely! Think about it, the minimum wage is higher than both reservation wages, so the employees are willing to work. Looking back at the “rules” if you will, we see that one employee brings in $20 of earnings for the firm, and two brings in $30. Using marginal product theory, we can see that it would be insane to hire 2 employees, as there would be zero profits, as compared to $5 in profits with one employee.

Did I mention that all the unemployed were involuntarily unemployed since the average wage ($15 in this session) was higher than both reservation wages.

Even competitive theory, the way a completely efficient market would look like, predicted this outcome. Let’s take a look at a graph I created for my homework that shows this competitive theory prediction for sessions one and two. 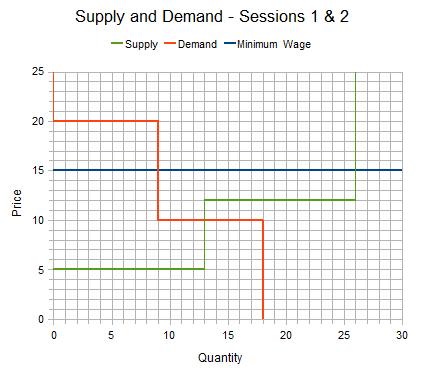 Supply and Demand of labor with and without minimum wage

You should see now that in cases like this, minimum wage hurts both the labor market and the employer. Yes, the average wage is higher, however there are less workers employed and less profits for firms. In the real world, where labor isn’t the only cost involved with doing business, this equates to all sorts of not so nice things.

In session three, everyone was hired, and the average wage was $20 – higher than minimum wage! This was due to the upswing in our simulated economy and our capacity to hire more people and make more money. Even our competitive theory graph predicted this: 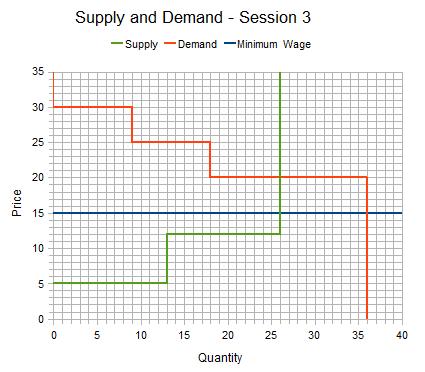 Hey, what do you know? In this case, we don’t even need a minimum wage!

As you can see, minimum wage is, depending on the status of the economy, either not needed, or in the case of a slower economy, a very bad thing. If my 200 level economics class can demonstrate this, why do we have tools pushing for even higher minimum wages?

If you have any questions about the execution of the simulations or the data I used, feel free to comment and ask!

1 comment for “Minimum wage: Even a 200 level Econ class can show it’s silly”