We did it.  We held a Town Hall in Traverse City.  We were able to organize this inside of ONE WEEK, and two VENUE CHANGES, and still had 200 PEOPLE show up. Congress?  Are you listening?  You are in deep trouble, as these folks are looking for a way to be heard. And since you weren’t providing that means.. we gave it to them with a forum to discuss the concerns, fears, and outrage they have with “the way things are going..”

Of course, A phone call from a local news outlet to one of the guest speakers, Ken Braun from the Mackinac Center just prior to the start of the Traverse City “Your Voice” Town Hall confirmed that because there would be no “politician” at the event, there would also be no news coverage for the event which had the most important speakers of all… The citizens.

The local TV station I suppose, has its priorities, a knitting party for cat wear will trump a real grass roots event EVERY TIME. In all fairness, the TV Stations have had to cut their budgets just like the many citizens, and driving to an event such as this may use some of the generator fuel they have left.  Budgets are a funny thing..  Apparently government is the only entity that doesn’t have to consider coloring its budgets inside the lines. But I digress..

It wasn’t the absence of the news that was troubling, but rather the absence of our elected officials which was the reasoning for the news to ignore the 200 person crowd. While the recess continues, there are few opportunities for the elected representation to come together with the people they purport to represent. This was one of those opportunities. And though we had even confirmed a “subordinate” from our local congressman Dave Camp’s office, it was two days before the event, he decided to find “better things to do.”

This is a partial shot of the folks who turned out Aug 13, at 7pm for the Traverse City Town Hall Event In this photo, Ray Pleva, one of the guest speakers discusses some of the nutraceutical  products he is currently working on. 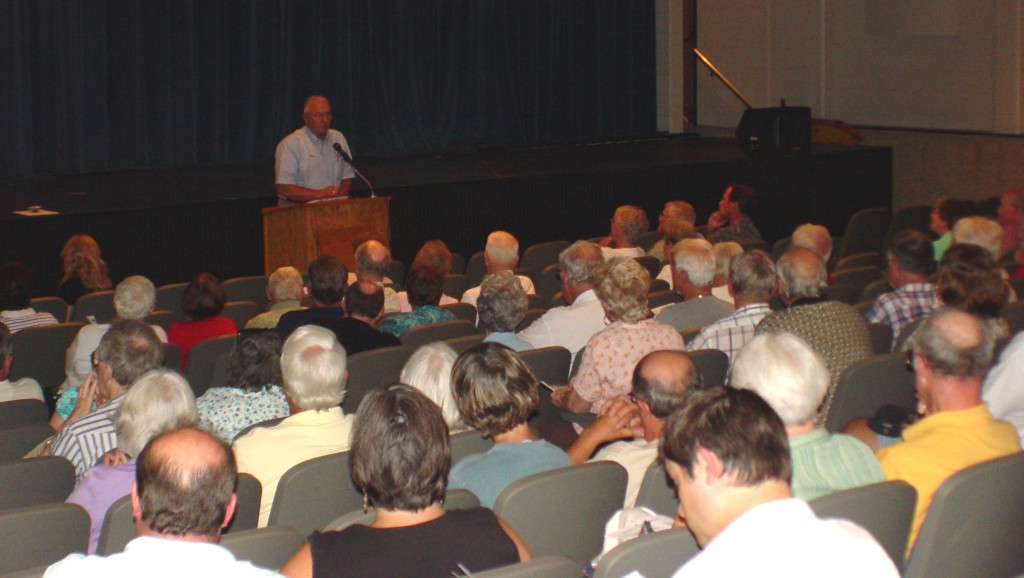 Ray Pleva Speaking on the benefits of his nutraceutical cherry products

The media is missing the point with the disagreements in town halls.  These people are hardly tools of any special interest, as they are merely confused as to why our government is trying to push forward a health care plan that is rife with untenable language and consequence. Maybe the news folks hope to find contentious behavior only, and with a politician handy to yell at, it certainly could happen.  And maybe THAT sells advertising.

But the fact that there is not a Stabenow, Levin, Camp, or Stupak (though Traverse city outside his district) present where such things are being discussed should not go un-noticed. Even given the short notice of the event, it would have been enough for any of them to have their own events in our region or somewhere that the constituents could have reached them. I suppose however, that if they had such events planned on their own, it would follow a protocol such as this:

No shouting. Congressional representatives cannot sell Obamacare with mobs of unruly senior citizens and small business owners interrupting to press them on specific sections of the bill. Limit your objections to a library whisper (30dB or less) and only challenge your lawmakers with hushed, dulcet tones. Otherwise, you will scare them and they will be forced to hide behind teleconference calls, sick children at hospitals, or union bosses.

But you know what?  We got things done.  People learned things.  We conversed. A couple of Doctors spoke, and even Madonna’s Dad weighed in let us all know he wanted government to back off. And now, more letters are being written today, yet our representatives are sleeping it off still at the resort of their choice during their “well earned vacations”

As an aside..  This “Your Voice” Town hall format was new and untried.  It was HIGHLY SUCCESSFUL, and I would encourage those who wish to put on their own to contact me for the format design, which allows for REAL conversation with your neighbors. Also, I will be working over the weekend to put together the video we have, and will have an audio track available that spans the entire Town Hall ready hopefully later today. – J