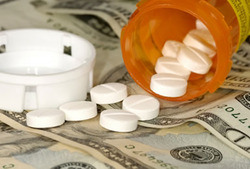 Sounds like hyperbole, right?  Well, depends upon your perspective after you read what I have to say.

Long time readers of FedUpUSA know me to some degree or another.  I’m a real person.  I’m not wealthy.  I’m not special.  I’m just your average person who happens to be rather opinionated and I share those opinions here on the Internets.  The following is my reality after Obamacare smacked me upside the head last week.  I’m prompted to share this rather personal story in the hopes that it will wake up a few more people.

I’ve had Blue-Cross/Blue-Shield of Michigan through my employer for more than 10 years.  My first reality won’t really be felt until April, but it’s a doozy.  With the implementation of Obamacare, my employer’s healthcare coverage is considered a ‘Cadillac’ plan.  This means that I will be taxed on the net value of what my employer pays for my insurance plan.  This happens to be about $12,000/year.  I have been fortunate enough to pay nothing out of pocket for this premium, but it is part of the reason I took my job in the first place.  However, now, instead of being taxed on my actual salary of $35,000/year*, I will be taxed on a salary of $47,000/year.  Well, guess what?  That pushes me into a much higher tax bracket.  So, besides paying for my co-pay ($3,000/year) I’m going to have to pay the government more than $4,000 extra per year in taxes.  So, where once I was paying $3,000 annually for medical expenses, I’m now going to be paying $7,000, $4,000 of which I will have to pay even if I don’t ever receive another medical service in my life again.  Yet, my actual take-home salary will remain $35,000.  So, how do you think this math works out for me and my family?  Yeah, we’ll be lucky if we keep our house or we can eat….because $4,000 of my annual salary is now being redistributed to purportedly cover those who don’t have health insurance.  Yet, now I can’t afford to eat!!!  How many households in this country can just suddenly assume a $4,000 annual increase in expenses?  Not many, according to the most recent polls that say more than 70% of Americans don’t even have savings equal to one month of expenses.  Now, this is bad enough, but worse yet is the following: 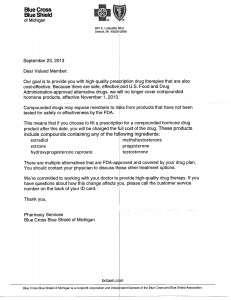 That’s a Notification from Blue Cross/Blue Shield of Michigan, which I received last week.  They’re announcing they are dropping all coverage of compounded medications, specifically anything related to hormonal replacement.  The reason they are doing this is…..because they can.  Sounds trite, but the fact is that the winner of the monopoly sweepstakes for health insurers in Michigan under Obamacare is Blue-Cross.  They now have a guaranteed monopoly due to the exchanges. Blue Cross had to convert to a non-profit corporation in order to be eligible for the exchanges….and conveniently, that is just what they did last year.  The article is comical in that it emphasizes Blue-Cross will be paying millions more dollars in taxes.  Ha!  That’s just a bald faced lie.  Non-profit corporations in the healthcare industry pay VERY little in taxes of any kind, including property taxes, from which they are all but exempt.  Oh, they file tax returns about a mile long, but the exemptions allowed for a non-profit corporation is more than two miles long, NONE of which are available to you.   This is a subject I know more than just a little bit about, since I happen to work in a field that is very involved in the non-profit status of healthcare organizations.  The important point here is that Blue-Cross has always, historically been a for-profit corporation, and would not have been eligible for the healthcare exchange if they had not changed their corporate status.  This is why Governor Snyder made such a big deal about it when it happened, but of course, the real reason it was a big deal to him certainly wasn’t revealed in the media.

Now, what is so devastating about Blue-Cross dropping coverage of the above-listed medications?  Well, I lost my mother last year to a condition called Frontotemporal Dementia.  This is acute, severe, early-onset dementia and it is hereditary, and has to do with a lack of certain hormones, which in turn, causes a deterioration of the brain.  My mother developed her first symptoms around the age of 40, and by the age of 50 was institutionalized.  I am at high risk for this disease and have been on compounded hormones for more than 4 years to protect me from developing it.  Without them, I have more than an 80% chance of developing Frontotemporal Dementia.  Contrary to Blue-Cross’s Notice, there are NOT adequate FDA approved alternatives.  All of the FDA approved medications are synthetic.  Not only do they not work the same in the body, in many cases, they do actual harm or make people sick.  I fall into the latter category.  So there are NO alternatives for me.

These compounded medications are not unsafe nor are they anything special.  They are merely natural forms of the human hormones.  So, this is, in actuality, a very simple and easy method to literally prevent someone’s death (mine).  There are no fancy, expensive ingredients; no cutting-edge technological processes needed to make them.   They aren’t even patentable because they are natural substances….which gets to the heart of why pharmaceutical companies hate them, and why insurance companies don’t want to cover them.  Neither industry makes any BIG money on them.  It has nothing to do with their safety or efficacy.  It has to do with profits.  They DO make big money on the synthetic versions of these hormones.

To say my mother died, a horrible, slow, agonizing 20-year death would be an insufficient description of what happened to her.  Now, due to Obamacare, I can look forward to the same.  I have in my hand the last refill of my compounded medication and when it runs out, I can no longer obtain this medication.  After visiting the pharmacy today, no one but someone who is independently wealthy could pay the cash price for these medications.  Even if I could have found some way to afford my medication, there’s certainly no way I can now with having to pay out another $4,000 annually in taxes to subsidize someone else’s health insurance coverage.  Whose money is the government going to redistribute to me so that I don’t die?!!  No one’s, that’s whose.  So, I have no choice but to go without.

So, there you have it.  Obamacare just gave me a very probable death sentence.  Who needs ‘death panels’? This works just fine.  This is not just because I now can’t afford my medication, but because it guarantees monopoly protection to insurance companies as well as pharmaceutical companies – and they’re ALL engaging in price-fixing and it will only get worse!  They can drop coverage on any medication they choose, leaving people to have to try to come up with the cash price for them, which are now 100, 200 and even 500% higher than the medication’s ACTUAL value.  The price of my medication if I were to obtain it in Belgium or France would be $15/month.  No, it’s not just the price of my medication, it’s the price of all medications for everyone, and the price of medical services!  And now with enhanced monopoly protections for the biggest of our industries, the ones that just happen to control the ability of people to live or die, we are all, literally at their mercy.  And this, my friends, is all because the GOVERNMENT has GRANTED them this ability, all while lying to you about how it’s all going to make healthcare more affordable.  It is by government law that these corporations are exempt from the monopoly protections that govern all other industries.  If you or I were to engage in price fixing or ‘cornering the market’ in any sector of the economy, we’d be checked into the gray bar motel.  Not so for the healthcare industry.

15 USC Chapter 1 – MONOPOLIES AND COMBINATIONS IN RESTRAINT OF TRADE

This is otherwise known as the Sherman Anti-Trust Act.  These laws apply to absolutely every, single sector of industry in our economy.  All of them.  Except one:  the healthcare industry.  Congress gave exemptions to pharmaceutical companies, medical device manufacturers and large non-profit medical institutions and now, with Obamacare, the health insurance companies.  This essentially means that these large corporations can engage in price fixing.  These exemptions to anti-trust laws are why it is illegal to engage in the re-importation of drugs in this country.  It is also the reason that nearly all large corporations in this industry sector are incorporated in the United States; their headquarters may be elsewhere, but they’re incorporated here.  This allows them to destroy competition by setting a government sanctioned, set price.  That means YOU have no choice but to pay what they demand.  Their exemption also means that by their forcing Americans to pay whatever price they demand, free and clear of competition, AMERICANS subsidize, with their purchase of these goods and services, the REST OF THE WORLD’S consumption of these things.  THIS is why other countries have more affordable medication and healthcare.  It is not, as some people would have you believe, due to single-payer, government-run healthcare – it is because other countries are NOT forced to pay a fixed price arbitrarily set by the industry itself and enforced and protected by the government.  When Britain’s NHS, for instance, is looking for a provider for  medications, they find the cheapest source.  We cannot do this.  What’s really ironic, in a disgusting way, is that one of the talking points for Obamacare is that it opens up competition; that it will bring MORE choices.  This is a bald-faced lie.  It does no such thing.  What it does do is give yet another portion of the healthcare industry sector monopoly protections by exemptions to the anti-trust laws.  Right here is the TRUTH about healthcare, and the ONLY way to fix it is to eliminate the monopoly protections in the healthcare industry.  The problem with accomplishing that is that these protections make Members of Congress very, very wealthy.  The healthcare industry is the 2nd biggest lobbyist force in Washington DC, second only to bankers and Wall Street.  Another problem with accomplishing this is that so very few people understand the truth.

What I have presented here is why Obamacare makes healthcare not only LESS affordable for everyone, it is also going to sentence many people to a life of misery or worse, like me, to a potential death sentence.  This is what happens when a government is allowed to pick and choose winners and losers.  The winners are their cronies in the healthcare industry, and the losers are us, the healthcare consumers.  And even among consumers, there are going to be government-chosen winners and losers.  I, for instance have been chosen to be a loser, while whoever is the recipient of my additional $4,000 tax payment will be chosen a ‘winner.’

Are you feeling lucky today? 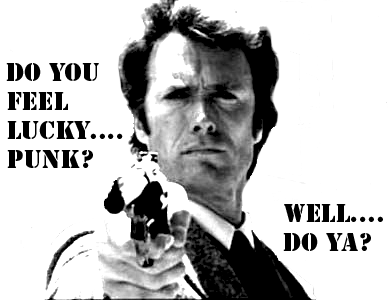