Is this the type of article we might see in a few years, given the current direction of political correctness and twisted logic?

Pflaeger, a bar owner in East Ann Arbor caters to a mostly homophobic male crowd that could not previously find a comfortable setting for their after work drinking. Now, with the help of the Federal Gay Alternative Credit program, he can cater to their desire to drink in a homo free environment. He says: 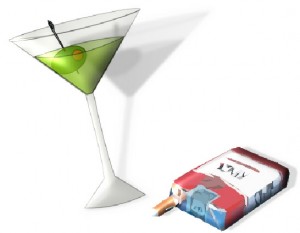 “I wish they would have thought of this years ago!  I was able to fire all the light-in-the-loafer bunch, and get some hard core dandys who don’t threaten the clientele.”

Pflaeger’s participation in the program began with the Luchisi V. Moran supreme court decision that held, ( among other things) “a business owner’s responsibility to the community requires it to observe the make up of that community in its hiring practices.”  In other words, his employee make up was to be directed by the community make up which could be nearly 20% homosexual.

This presented a major problem for Pflaeger, who has been battling local authorities in his hiring practices, and found himself “stuck” with 4 of his 20 employees whom are gay, and tease the patrons with their subtle mannerisms. The Luchisi case decision, and Sonia Sotomayor’s writing for the majority held:

“Just because they act gay does not constitute a violation of employment conditions.  Further, to dissect mannerisms to that point where it is used as an excuse for dismissal, is unacceptable”

So Pflaeger was out of luck..  until the Federal Gay Alternative Credit program began.  The program, now winding up its first year, has allowed non gay friendly business entities to “purchase” licenses from local governments in lieu of hiring actual homosexuals.  The Federal Gay Alternative Credit program was based on the Carbon Credit program where the non use of certain “allowances” allowed the owners of those allowances to “sell” to either local government or to other polluters directly.

In this case, Pflaeger was able to buy credits that were provided by other businesses that were homo-laden enterprises.  And it has his business seeing double digit recovery in a matter of months.  After boasting of his improved numbers he exclaimed:

ALSO.. check this out.. I was able to get some business smoking credits from a closed up Indian casino, so I’m back in business there as well!

The success of this new method of raising money by government and balance of trade practices has not gone unnoticed by lawmakers and regulators who have already begun implementing Racial Credit programs, and Childless family Alternative Credits.

In fact, The EEOC has proposed a new method of balancing concerns between race issues and actual qualifications when hiring.   It is remarkably similar to both the carbon credits AND the Gay Alternative credit programs. They have devised a formula where business that exists in some areas with low racial diversity can “buy” exemptions from actual highly diverse or racially monochromatic business environments.  Head of the new program within this federal department, Dr. Judith Castor says:

“We feel we have a way to settle issues for those who don’t want to spend the resources seeking a diverse workforce, and solve the balance issue in other environments as well.”

Dr. Castor, a U of M graduate is proud that the new program will have its first trials in Michigan, and will be administering it from Ann Arbor, a fully diverse environment.

“Providing guidance to those within the program requires a certain degree of neutrality, and the federal standards established to determine which mixture of races is appropriate in work environments has determined that Ann Arbor Michigan meets nearly all of its requirements without modification.”

Diversity it appears, does have its advantages.

However, the Childless Family Alternative Credit program has not been received so well, as a part of that program is being challenged by pro life groups who claim there is too much incentive to “harvest babies” for cash credits.  The particular provision Sec 1A of the CFAC says that “an aborted fetus turned in once per semi year re-certifies that family for another year of the claimed allowance.”

What this means, is the certified family gets to “double dip,” which angers many within the Right to life movement.

Indeed, there seems to be a correlation between the newest program of shedding family size, and an uptick in abortion rates, as the abortion on demand figures have been bumped almost 40% since the program’s inception 4 months ago.

But apparently there is an upside. Though Right to life types still cry foul, others praise the new law’s side effects:

“The embryonic stem cell harvesting has been phenomenal!”

Says Dr. Geoffrey Milfrank of the MedCed fertility centers in Livonia.  Milfrank describes a new break through that could cure infant mortality because of the increased availability of human embryos for experimentation.

Our researchers, prior to the CFAC had to be very careful about how they handled the specimens.  Now because embryos are so plentiful if we make a mistake we start over.  It has sped up the process exponentially!”

← Ask Dan Number 2
Grayson Out Of Context As Well →

3 comments for “The NEW Carbon Credits?”